On April 9, 2017, Chad from ComicReaders Downtown was invited to speak at the Sunrise Branch of the Regina Public Library to talk to parents and children about comics and graphic novels for kids. What follows is the list of the graphic novels he talked about, including excerpts from his speaking notes.

The last time I was here I ended with a superhero book (The Unbeatable Squirrel Girl) so this time I decided to begin with one. Super Sons, published by DC Comics, features the adventures of Damien Wayne (Batman’s son and current Robin) and Jonathan Kent (Superman’s son and current Superboy).

Jon is what you would expect as the son of Superman and Lois Lane—kind, loyal, smart. He also knows how and when to keep his powers a secret. Damien, meanwhile, is brash, independent, and arrogant. Damien and Jon don’t always get along but they do recognize each other’s abilities and team-up (sometimes reluctantly) to deal with problems that occur when their parents are too busy with their own hero activities. 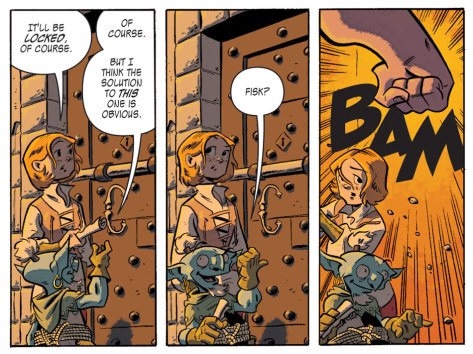 This seven book series is written and drawn by Canadian Scott Chantler. The first graphic novel is called Tower of Treasure. The final, seventh volume, which was published in 2016, is The Iron Hand.

The series takes place in a fantasy world where Dessa is an acrobat in a travelling circus. In the first book, she joins her fellow circus performers (two non-humans) in robbing the royal treasury, thus setting off a series of adventures. Each adventure unfolds in one of the graphic novels and each reveals another thread in the mystery of her missing twin brother.

I read a couple of industry reviews that stated The Three Thieves should be as influential as Amulet or Bone. High praise indeed!

Scott Chantler is also the writer / artist of The Two Generals, a graphic novel based on a diary Scott’s grandfather kept when he was lieutenant in the Canadian military during WWII. That is an exceptional read for older children with an interest in history.

Another exceptional Canadian graphic novelist is Faith Erin Hicks. The Nameless City is the first of a planned three graphic novel series. The Nameless City is a city that has its name changed each time it is conquered. The most recent conquerors are the Dao. Kaidu is a Dao boy sent to the city for military training. Rat is a girl native to the city.

The first graphic novel focuses on the developing relationship between the two young characters. Dao is one of the conquering privileged. Rat is one of the locals, poor and living on the street. She teaches him how to run along the city’s rooftops. He sneaks her food.

It is evident Faith Erin Hicks has something to say about the current state of the world, regarding how schisms between ethnic groups could be overcome if the time was taken to understand one another. Those are heavy themes for a young readers’ book, but Hicks is a deft storyteller. Those themes are present—and you can explore those with your children—but the core of the story is the two young characters and the friendship they develop.

Over the Garden Wall

The 10-episode miniseries (each episode is 10 minutes long) is tricky to find these days even though it was originally aired in November 2014. It is something worth seeking out. Bizarre, visually interesting traditional animation—not 3D / Pixar stuff. An intriguing story of two brothers lost in “The Unknown”. A woodsman who tends a magical fire. A bluebird with a secret. And “The Beast”, a dark presence that is at the edges of the miniseries, tickling it with eerie moments. 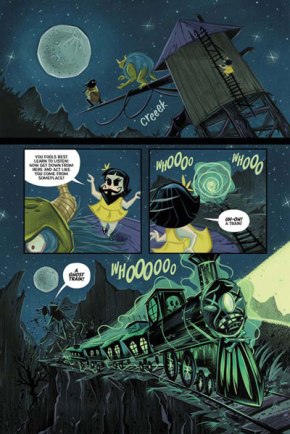 Eric Powell is a comic book creator who I often praise at ComicReaders. His The Goon was one of my favourite comics for years. It’s full of monsters, and fights, and slapstick, and weirdness and violence, and humour and even moments of crushing sadness. It’s not for kids.

But Chimichanga is for kids. The original graphic novel—Chimichanga—has Powell’s lush artwork, but also his humour and weirdness.

Lula is a short, bearded girl. She travels with a circus. The circus isn’t very good. “Come see the two-eyed goat.” The strong man is “slightly stronger than a large man” and can “open pickle jars with his bare hands.” But life at the circus changes when Lula receives a strange rock from an even stranger woman. The rock hatches a giant beast—the first actual freak in the freakshow.

It’s a quick read but packs a lot of visual punch. At first glance it can appear creepy, but as you look longer you see the humour.

A second series Chimichanga and The Sorrow of the World’s Worst Face is now underway. That one is written by Eric Powell, but is drawn by Stephanie Buscema.

Bizarre happenings are also at the center of Warren the 13th and The All-Seeing Eye. Warren is the 13th Warren in a long line of Warrens. Each Warren has run the family hotel. Warren the 13th is too young to run the hotel so his uncle runs it. He does a poor job. The once busy hotel is near empty. It is also being torn apart by aunt Annaconda. She’s searching for a treasure supposedly hidden in the hotel—the All-Seeing Eye!

This book is a chapter book with illustrations throughout. It has mazes and secret codes, witches, and a mysterious guest wrapped in bandages who only speaks with cue cards. It has a cast of weird characters, and an engaging mystery. It works as a single body of work, but a second book was released in March 2017.

The witch in The Lunch Witch is not a villain. She’s not exactly a “good person” either, but you’ll find yourself sympathetic to her plight. Grunhilda is one in a long, long line of witches. She inherited the family’s book of potions, but, alas, the world does not believe in magic anymore. As a result, her potions store closed. She then worked as a “fake witch” at the Salem Haunted Museum, but got fired at her job for “not being scary.”

A person has to work in this world, so she applies to be a cook in a school cafeteria. She gets the job because of her skill at making gross things, plus she has no criminal record. At the school, Grunhilda meets Madison, a girl who is failing her classes and is often late for class.

There is a lot I like about The Lunch Witch—the ridiculous premise, the little girl Madison, Grunhilda’s talking dog, the fact the comic looks like it was drawn on old, dirty paper, including a page that looks like it is burnt! I even like how the writer makes use of thought bubbles—which are bits of text that show you what a character is thinking. A good example is when Madison is meeting with the principal and the principal is seen thinking “Be firm. You’re not her friend” and a few moments later when the principal is talking to Madison about her poor performance at school and she is thinking, “Don’t cry. Don’t cry.” That feels authentic even if this is a graphic novel about a witch working in a cafeteria.

Claudette is the main character in Giants Beware and Dragons Beware. Each is a separate story featuring a set of characters: Claudette, a young girl who yearns for adventures filled with fighting giants and dragons; her best friend who is an aspiring princesses; and her little brother, an aspiring pastry chef.

Most interestingly, this is not a book about fighting even though Claudette wants to go out into the wild and destroy giants. This is a story about peaceful conflict resolution. That might seem “dry” in a children’s story, but it is handled very well here. The story does not lose any of its fun. And it is a worthwhile lesson.

Godzilla: The Half Century War

That art is from James Stokoe and it is from the graphic novel Godzilla: The Half Century War. Every page of that graphic novel is that jam-packed with detail. It is a stunning achievement.

It’s not necessarily for kids—we don’t shelf it in the children’s section at ComicReaders—but some older kids know about Gozilla, King Kong and other monster movies and when they come to the store and ask about Godzilla we show them Half Century War.

Phoebe and Her Unicorn

Now let me put this up here for a moment. 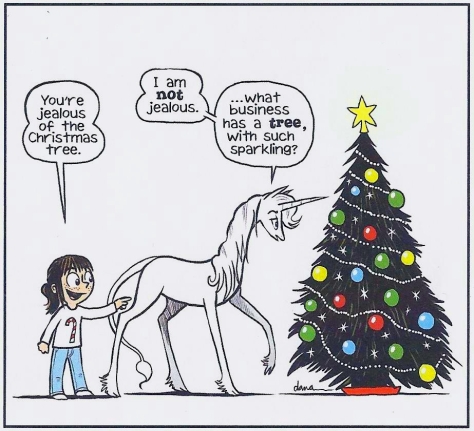 The little girl is Phoebe. The unicorn is Marigold Heavenly Nostrils.

The first collection starts with Phoebe accidentally hitting the unicorn in the face with a rock. This leads to Phoebe getting one wish, which she uses to make the unicorn her friend. Marigold Heavenly Nostrils—like all unicorns—is very vain, so to her it is no surprise Phoebe would want to be her friend.

Phoebe had hoped having a unicorn for a friend would make her awesome, but as we read Phoebe and Her Unicorn we realize Phoebe is already awesome.

Each page is a gag—much like a comic from the newspaper funny pages—yet there is a larger story here—about a girl seeking acceptance; about a girl looking to make sense of her world; about a unicorn who—as we saw in the panel above—is jealous of a Christmas tree.

It’s also about how friends help each other—as we see here in the following slide:

[ComicReaders is a proud supporter of the Regina Public Library. It was an honour for me (Chad) to be invited once again to talk to parents and children about graphic novels for younger readers.]