I celebrated my first year as a comic shop owner and the anniversary has gotten me nostalgic. I think back to when I was just a customer at ComicReaders on Grant Road and that leads me to fond memories of writing for ComicReaders.com. I interviewed comic creators and wrote reviews, blurbs of which would sometimes eventually adorn back or even front covers. I still have a print out of the email Roman Dirge sent me after he found my review of Lenore online, and, to this day, if you look at a collection of Elephantmen you will find a snippet of a review I wrote.

In honour of those good times, I shake the dust off Weekly Wanderlust—a weekly column in which ComicReaders.com regulars like Hnetka, Tillusz, Boudreau, Cameron, Hintze, Brennan, and others told comic readers what they thought about the current week’s releases. 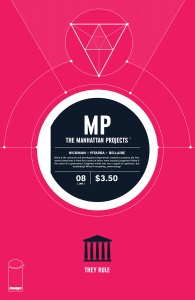 After the events of issue #7, I was certain President Harry S. Truman and his troupe of perverted and powerful Freemasons would challenge the plans of Joseph Oppenheimer, Albert Einstein, Wernher Von Braun and the other twisted geniuses of the “Manhattan Projects”, but I did not think the conflict would climax in the very next issue.

Truman unleashes the computational super genius of a dead president in order to eradicate the fledgling cabal. In Russia, Von Braun partners with Russian cosmonaut Yuri Gagarin and space dog Laika while on American soil Einstein uses an M-60 to mow down rogue robots. The image at the comic’s close made me wince and smile, and I found myself, once again, asking, “Just where the heck is this comic going?”

Manhattan Projects is one of the most outlandish and addictive comics gracing my nightstand on a monthly basis. (Chad Boudreau) 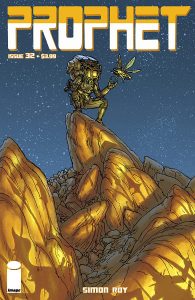 I have always felt science fiction is under-represented in North American comics, but 2012 was the year I discovered some of the best sci-fi sequential tales I’ve ever read: The Massive, Saga, Manhattan Projects and Prophet.

Simon Roy has drawn and co-written issues of Prophet but issue #32 has him standing alone on both chores. It is testament to Roy’s involvement in this series that this issue’s voice and style is seamless with all issues before it. Roy is an important part of the Prophet team, and I’m very proud to see him fly solo. (Chad Boudreau) 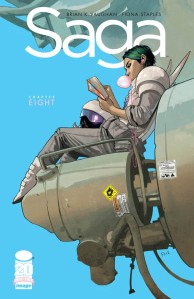 I know now why Saga lies below Manhattan Projects, The Massive and Prophet on my reading pile. For all its sci-fi settings and characters, Saga is a family drama / comedy. This is the kind of sci-fi HBO would make.

Don’t get me wrong: I highly recommend Saga because it is more accessible then the other sci-fi titles I mentioned and because it is one of the best looking and consistently well written titles on the shelves. And I may not have fallen in love with it yet, but it did take me three trade paperbacks before I got hooked on Y: The Last Man, and that series by Brian K. Vaughan is one of my favourite comic series of all time. So I have faith.

In this issue, we get a glimpse of the early days of Marko’s relationship with Alana, and more flopping, giant scrotum.

Yes, a well-written comic can have flopping scrotum. (Chad Boudreau) 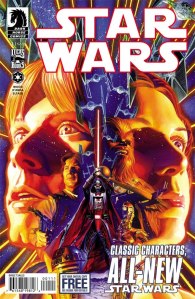 There is no understating the importance of the original Star Wars trilogy on a pop cultural level. It also had a large impact on me personally which is why changes to its core struck me like a physical blow. The films I grew up with now exist only in my memory.

I have recently introduced my sons to Star Wars via all six films and the X-Wing Miniatures game. This had gotten me aching for more Star Wars and the new comic Star Wars by Brian Wood turns out to be the perfect medicine to ease my pain.

With DMZ and Northlanders finished, Wood turned his attention to The Massive, a comic that graces the top of my to-read pile whenever it arrives. It was with confidence then that I picked up issue #1 of Star Wars, a comic that intends to focus on a time shortly after the Battle of Yavin (also known as the end of the Star Wars Episode IV).

What pleased me the most about this debut is Wood’s use of characters like Han Solo, Leia, Luke, Darth Vader, and even Wedge. He actually develops the characters, getting into their minds, exploring the personal aftermath of that climatic showdown between the Empire and the Rebels. “I keep thinking I should feel different with all that’s happened,” says Luke, “but Ben’s still dead, Biggs, my aunt and uncle, too. Wedge lost pretty much every fiend he had at Yavin.” 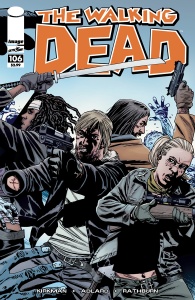 The Walking Dead is such a frustrating series. Every darn issue makes me wish I had the very next issue at my fingertips.

This one is no different.

Carl and Negan continue their tête-à-tête; Kirkman takes us back to domestic matters at the gated community; and, Rick and a handful of trusted friends search for Carl. And just as I’m shaking the comic book and yelling, “Sweet Jiminy-Christmas, just let Rick find Negan’s lair,” who should Rick and others meet on the open road…

“I can’t wait until you see what I’ve done to your little boy,” says Negan and I can hear the bile dripping out of his voice.