(The following comments were originally posted on the ComicReaders Comic Reading Facebook Group on Halloween of 2019. That group has since been turned down.)

I am handing out candy and reading this one.

I was on the fence about this series and was considering giving up because it felt confusing and couldn’t get to the point.

It felt less a mystery and more a self-indulgent mess.

Well, it got really good with this trade and it finally feels like it’s going somewhere and questions are being answered. It’s satisfying.

A good spooky one for Halloween. (Matt Barton)

What kept me going in the early issues was the art gymnastics. I feel like the creative team is taking some big risks here with a story that provides almost zero answers for the first— testing my memory here– 12 issues. Volume 3 is definitely where the groundwork starts to pay off.

I’d also like to mention that Gideon Falls is read by three people in my family– my wife, my oldest son, and me. (Chad Boudreau)

Moonshine could have ended at issue #6. All the plot threads were not neatly tied off, but it was a satisfying final issue to the debut story arc. Moonshine eventually returned for another six issues and when #12 hit it once again felt like the creative team could walk away feeling proud and I could walk away feeling like the story had a conclusion. Again, not everything wrapped up in a bow but some of the best stories don’t have tidy endings so I never sweat the small stuff. And now as of last week, Moonshine is back for another arc and I’m confident I’ll settle in nicely, enjoy the ride, and get back out feeling satisfied.

In Prohibition era America, a New York mob boss sends a hood into the Appalachian mountains to cut a deal with a moonshiner whose booze is a hot ticket in the city’s clubs. The mob boss wants control, see, because the moonshine is cutting into his own booze business. The moonshiner and his clan are just as tough and stubborn as the mob and so, of course, the two groups don’t get along.

That sounds ridiculous and looking at a slew of online opinions suggests readers have either embraced or completely rejected this genre mash-up. Me, I’m all in, of course, because creators Brian Azzarello and Eduardo Risso are cool hands at creating big personalities, juggling large casts, and playing within the defined rules of genres even as they upturn the applecart. They created 100 Bullets, a title that took a simple question and turned it into an epic featuring at least a dozen central characters, all damaged and multi-faceted, all racing toward a tragic and inevitable conclusion. 100 Bullets is a character driven crime comic that has not yet been equaled in scope. They also created Spaceman, a hard sci-fi in the guise of a crime tale about a kidnapping. So when I read that Azzarello and Risso were doing a new comic about Prohibition, gangsters and werewolves, I did not hesitate for a second.

Moonshine is populated with tropes of the grittiest crime stories. Tough talk, threats through body language, dangerous dames, tommy gun ambushes, double crosses. It also has werewolf staples like moonlit transformations, the reluctant beast, and the troubled beauty. It also has some elements unique to the creative team: Azzarello’s terse, stripped down dialogue; his irredeemable yet engaging characters; Risso’s character designs with tired, sorrowful (or angry) eyes for the men; full, sinful lips and figures for the women; dark palette for colours; and key scenes that are worthy of hanging on a wall.

I developed an interest in crime comics leading up to the creation and release of Acts of Violence: An Anthology of Crime Comics in which my comic “The Three Princes” appears. I researched the genre– from its heyday in the 40s and early 50s, to its decline (and the parallel decline of horror comics) in the late 50s, and eventual resurgence in the late 80s and early 90s– and located and read many of the genre’s shining examples, both past and present, including “Murder, Morphine and Me”, Miss: Better Living Through Crime, and Criminal. My interest in the genre continues post-Acts of Violence and I want to tell you about two additional shining examples of the genre—one a self-published endeavor from an emerging Canadian talent, and the other a book I did not know about until one of its creators told me to check it out. END_OF_DOCUMENT_TOKEN_TO_BE_REPLACED

Richard Starkings and others
(a) Moritat and others

Elephantmen is a spin off from the series Hip Flask. It’s set in the same dystopian future and expands on various minor characters from the main series. Each issue features two stories. The first puts the focus on a different Elephantman, a genetic hybrid between man and animal, to give us insight into their current and former lives, thus providing more information about these characters, many of whom play supporting roles in Hip Flask. The second stories are pieces of a longer story involving Hieronymus “Hip” Flask trying to obtain an African artifact. END_OF_DOCUMENT_TOKEN_TO_BE_REPLACED 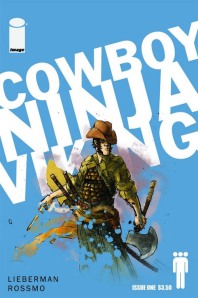 I haven’t read anything from A.J. Lieberman since his run on the now defunct Batman: Gotham Knights way back in 2006. He wrote also Martian Manhunter series that I didn’t read and it doesn’t look like he’s done much since till now.

His Gotham Knights run was ok – it didn’t seem to leave much of an impression on me because I can’t really recall what I thought of it. His new series is from Image and features an individual who has a multiple personality disorder. Duncan was the experiment in a weapons program that used his MPD to try and create an ultimate weapon out of him. Duncan has three personalities. One is a cowboy, the other is a ninja and the last is a viking. The three personalities all interact with each other in his head. To differentiate them, the word balloons are shaped as a gun, sword and an axe. Also on the art front Rossmo draws Duncan wearing a cowboy hat, ninja mask and a horned viking helmet at various times.