Let me back that up.

It is difficult to find a superhero story that can be understood and enjoyed and makes a lasting impact without first requiring you to be intimately familiar with a character’s back catalog. Don’t get me wrong. One of the great joys of comics is following characters issue to issue in familiar situations, fighting familiar faces, with just enough freshness to keep the pages turning. Shake it up a bit. Get a response from the reader. Reset. Creative roster change. Slap a new title on it. New #1. Do it all again. Nothing wrong with that.

But, man, those gems that can be handed to an interested reader, a curious reader, the kind of book that can grip and not let go. Those are rare. I keep mental lists. Most recently it has been Batman. What are the rare gems? Year One, Dark Knight Returns, Batman 100, The Long Halloween, Dark Mirror, Red Rain. There are others but it’s not a long list considering the age of the property.

But there is a new addition: Batman The White Knight by Sean Murphy and now Curse of the White Knight, which is the sequel by the same creative team.

I got into The White Knight because of Sean Murphy’s art. Of course he wants to write Batman. Who wouldn’t, right?! But could he do it? It did not matter to me. I waned to see the art– Murphy’s riffs on iconinc Batman characters and material. I was not disappointed with the visuals.

But the story! Whoah. Solid once he got past the opening action sequences and settled into dialogue and plot. Joker goes straight. Makes Batman look like the bad man. Good hook. I didn’t think it would deliver. It sure did.

The sequel builds on Murphy’s take on Batman and the Joker. He adds new layers, new complications, new surprises. And these will stick. He’s allowed to do his own thing. No reset in this vision.

Former knowledge is welcome but not required. He gives you what you need. Little touches. Gives you the flavour. And let’s be honest– if you’re picking up a Batman comic chances are you know the fundamentals of the character.

I don’t talk about superheroes very often. Other ComicReaders are far more capable. But White Knight and Curse of the White Knight have me yapping. Both will enjoy a long shelf life. (Chad Boudreau)

After completing one hundred issues of his creator owned 100 Bullets, the first new series writer Brian Azzarello has decided to work on is this project called First Wave. Azarello has taken licensed legendary pulp novel character Doc Savage and mixed him in a world with a gun toting Batman (who is standing in for The Shadow), Will Eisner’s The Spirit, Rima the Jungle Girl, The Black Hawks, and Black Canary.

The time seems to be a few years after WWII and Doc Savage’s father has just died. Doc missed the funeral while away on business and has just recently returned. Meanwhile, a corrupt Chief Dolan tips off The Spirit about something going down at the docks. This Spirit is different than Eisner’s and the recent comic and movie reincarnations. He’s still closer to Eisner’s version than he has been of late. The main plot seems to be about some evil scientist doing some sort of experiments on a jungle island. The mystery is intriguing and it will even more interesting to see how everybody fits into the story.

Rags Morales’ art is perfect for this story and it has nice clean look to it. It’s good to see Doc Savage back in comics form and it’s also good to see The Spirit return, especially after his crappy movie bombed. This series looks promising and I can’t wait to see what the Doc Savage and new The Spirit series are going to be like, which are spinning out of this mini-series. (Shane Hnetka)

The seed for this article was planted during a conversation I was having during which I made an off-hand comment about the best Batman stories. It began life as the “Top Ten Batman Stories of All Time”, but after Dark Knight Returns and “Year One” I had trouble ranking my other picks in any kind of order. It stuck in my head until I had to write it.

However, the more I thought about it, the more I realized my best of isn’t going to be someone else’s best (and some of my choices are a bit wonky and even wonkier is what DIDN’T make the list). So, I settled for the Batman stories (single issues or multi-issue storylines) that I personally find the most memorable.

With sixty plus years of Batman stories to choose from here is what I whittled it down to:

While I don’t like Frank Miller’s take on Bats in general, this story is my all time favourite. Inside you’ll find warped humour, iconic imagery, and apocalyptic battles. There has been forests of appreciation dedicated to Miller’s Dark Knight Returns, and I don’t think I can add anything to the mountains of words already written. END_OF_DOCUMENT_TOKEN_TO_BE_REPLACED

In 2003, comic book veterans Jeph Loeb and Jim Lee took Batman to the top of the sales charts with “Hush”, a 12-issue storyline pitting the Dark Knight against an unseen villain with a score to settle, amidst a backdrop of almost every major supporting character in the series’ continuity. Though the series was a financial success, fan reaction was polarized by the time the series ended. Now that the entire series has been collected in paperback trade format, the question remains – does “Hush” deliver?

First things first–- Jeph Loeb delivers a well-written Batman. He strips the character down to the essentials, writing him as a solemn, efficient and brutal vigilante. This is a Batman who glides through the shadows, an intimidating and unstoppable hero who has studied his enemy and will let nothing stand in his way. The story is told not through painfully forced word balloons, but through concise narratives detailing the detective’s intricate thought processes. He is a man of few words, one who shoots first and asks questions later, and under Loeb’s direction, Batman is a force to be reckoned with. END_OF_DOCUMENT_TOKEN_TO_BE_REPLACED 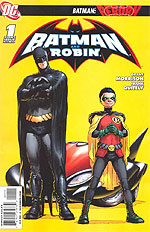 I went into this one with great trepidation. For me, it had everything going against it.

Grant Morrison had two major strikeouts with his Final Crisis and Batman: RIP. I’ll give him credit though; he ALMOST redeemed RIP with the last issue revealing that Bruce was in control of the situation the whole time. Lame ending though with the helicopter crash. Final Crisis was basically a WTF? I hated this storyline when it ran as “Prodigal”. The lead-in storyline, Battle for the Cowl, was a bit weak as well– it needed two more pages at the end to set up the new status quo for all the main characters (i.e. TIM!).

The big surprise though is Damien as Robin. I hate the little creep but I’m intrigued to see where this goes- a light Batman and Dark Robin, talk about turning a book on its head!

Cards on the table time. I liked it! It wasn’t the plodding, dull, pretension I’ve come to expect from Morrison lately. It was actually fun! The flying Batmobile. A hopelessly lame villain (Toady) that the new Dynamic Duo makes short work of. Not sure what to make of the guy in the pig mask. Lots of good character bits with Dick, Alfred, and the little creep. Quitely is Quitely- ’nuff said. Too bad he’s only around for the first three.

The twist of moving back to the cave under the Wayne building came as a surprise- something else I never saw coming. (Complete with cut-away floor plan, which I missed on the first read.) Two minor quibbles- I REALLY wanted to see Gordon and Bats come face to face here. (And where was Tim! They at least mentioned him in passing.) The other quibble is a bit more intangible- knowing that Bruce is still out there waiting to come back colors my reading of this. We know he’s coming back but the characters don’t. I can’t put my finger on whether or not it’s a feeling of futility for the temporary-ness of it or dread for what happens when Bruce comes back. I guess we’ll see in 2010 in the 6-part Batman: Reborn Again…… I debated whether or not I was even going to pick this up but I’m glad I did.

I’m looking forward to the next year- after reading Morrison’s interview on CBR it looks like some cool stuff is coming. Hopefully he can continue to deliver on the promise of this first issue. This was a good, fun, Batman book. After years of unrelentingly grim Bruce this is a bit of fresh air. Looking forward to what’s coming next. (Ken Boechler)