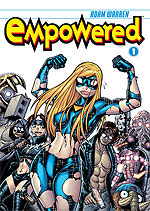 “Bahh. Like all too many females, the alpha wench fails to appreciate a well-timed movie quote!”

Adam Warren was writing and drawing manga before it was popular here in North America. In the late 80’s, Warren began drawing and eventually writing an American adaptation of the popular anime The Dirty Pair. I discovered his work after he had already completed several Dirty Pair series and found I enjoyed them immensely. Later, when he took over Gen 13, I felt he had produced some of his best work on the title. I try and pick up Adam Warren’s work whenever he does something new. Lately, he has been finding work with Marvel, such as his enjoyable Livewires miniseries, but Empowered is a return to creator owned work. END_OF_DOCUMENT_TOKEN_TO_BE_REPLACED

Sir Edward Grey – the Witchfinder graduates from background supporting character to his own mini-series. This mini-series looks at one of Sir Edward’s many occult cases. In London 1878, there have been several murders. Each man appears to have been drained of blood and torn to shreds. Sir Edward is called on the case and quickly discovers that a man called Lord Wellington and the dead men were all apart of a expedition that had disturbed some ancient evil that was resting in the remains of an ancient city out in the Sahara Desert.

Ben Stenbeck art’s is pretty good for this mini-series. After his work on the B.P.R.D.: The Ectoplasmic Man one shot, he seems to be becoming one of Mignola’s stable of artists along with Guy Davis and Duncan Fegredo. Mignola’s writing as always is spot on. Although I was hoping for a story about the history of Grey and how he wound up living in the shadows observing Hellboy’s various adventures – that story will apparently be told later down the line. For now I’ll have to enjoy this series. (Shane Hnetka)

The latest offering from the brilliant Norwegian cartoonist Jason is this hardcover book containing his Low Moon story that was serialized in the New York Times Sunday Magazine “Funny Pages” section. It also has four other short stories, each as entertaining as the last.

The book starts off with Emily Says Hello–a dark and twisted story of murder, meted out with  a mysterious catch phrase. The next is Low Moon, a western cowboy showdown with chess instead of guns.

It’s tough to choose favorites with Jason but even though I really enjoyed Emily Says Hello, the next story, entitled &, is just a masterpiece. It’s a simple story of unrequited love and the depths that some people go to to get it. Black  comedy at it’s finest.

You know what, I’m mistaken–the next, Proto Film Noir, which mixes cavemen and noir stylistic elements, is my favorite. It’s the old “bump-off-the-husband” routine with a plot device that reminds me of the Roger Corman produced, Jacques Tourneur directed, Richard Matheson written movie The Comedy of Terrors. Both feature similar problems for the protagonists. Let’s just say death gets a little more complicated than usual.

The final story, You Are Here, features a father and son whose wife and mother has been abducted by an alien. Dad is determined to get her back. It’s a sweet and melancholy story.

For those who haven’t tried Jason’s work, you just don’t know what you’re missing. His stuff is brilliant and this latest offering is awesome.

I just wish that all of Jason’s work came in as nice of a hardcover collection as this. (Shane Hnetka)