NOTE: This game is currently out of stock at our distributors, which means we don’t have copies in our stores and we can’t order it.

Aqua Romana is a German-style board game for two to four players. Players assume the role of experienced architects and use workers and master builders to build aqueducts that supply water to towns and cities during the age of the Roman Empire. The winner of the game is the architect that has accumulated the most points by building the longest aqueducts.

Players begin with a reservoir, a source for the water that will be carried in the aqueducts they build. A worker is placed on each exit of the reservoir. As an aqueduct is extended from this exit, the worker will move along the aqueduct’s length. Once an aqueduct is finished (described as “closed” in the game instructions), points are scored for the length of the aqueduct and the worker is removed from the game. This means each player has a limited number of workers, and thus the number of aqueducts they can build is also limited.

What is also limited in Aqua Romana is the space in which players build their aqueducts. All the building occurs within a pre-defined area (the centre of the game board). This means there is less and less space available for building as players extend their aqueducts. This is one of the reasons why careful planning is required.

These game mechanics mean players need a considerable amount of forethought when deciding which workers and master builders to use to extend aqueducts. Careful planning is required to maximize space, but also to ensure the majority of your workers can “see” master builders, thus ensuring you always have a number of options. That said, you need to be able to change your strategy at a moment’s notice because another player could use a master builder you were hoping to use, could built into territory you were hoping to use, or could even prematurely close one of your aqueducts by adding to their own aqueduct! 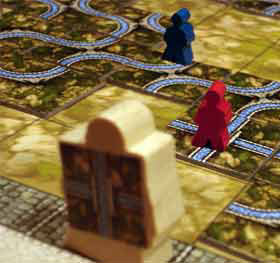 Aqua Romana has only one glaring weakness: its rule booklet. Though not lengthy and generally easy to understand, there is a known error, which was made during the translation of the original German. The rules seem to suggest that if a player cannot lay a tile because none of their workers can “see” a master builder, the player must use one of their opponent’s workers to lay an aqueduct. That is not true. The correct rule is that if a player cannot lay a tile then the player must move one master builder one space clockwise around the outer edge of the board. (Discussion about the rules can be found on boardgamegeek.com, which is also where a more accurate translation of the rules can be found.)

Aqua Romana is a strategy game. There is no luck involved.  True, the level of strategy required is not as deep as required for the tile-laying game Carcassonne or the likes of Settlers of Catan where players need to weigh a variety of options and can utilize several paths to victory, but you will find yourself thinking and planning when playing Aqua Romana.

This 2006 Spiel des Jahres Nominee averages 60 minutes per game and has attractive components and a sturdy game board. Perhaps a little light for veteran strategists, but certainly worth a look for casual gamers and newcomers.