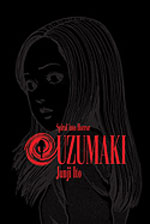 It is rare that the mundane be made truly unsettling. Manga-ka Junji Ito manages to achieve this in Uzumaki volume 1. He makes the pattern known as spirals a device of horror.

The first instance of this pattern occurs on the very first page. Kirie is overlooking the seaside town in which she lives. The sky above is grey and spirals can be seen in the clouds. This is a subtle instance of the spiral and almost goes unnoticed. A couple pages later, Kirie is walking down a street and a whirlwind rushes past. On the heels of that, she spots her boyfriend’s father crouched in a grubby alley. His attention is fixated on a small object. That object is a spiral shaped snail shell. It’s a quietly unsettling moment because such fixation is unnatural and as such just simply feels wrong.

Spirals remain a fixture Uzumaki from that point on. Volume 1 is divided into a series of chapters, each one a tale that describes another individual’s obsession with spirals and how that obsession leads eventually to despair, madness and ultimately death or worse.

As I write this review the premise sounds absolutely absurd. An obsession with spirals that leads to madness is an absurd idea, but by the time I reached page 30 at which time the father’s eyes start moving in spiral patterns on their own accord I was engrossed and grossed out by what was occurring. I was also unnerved. The unnatural physical manifestations of this obsession were increasing at an alarming rate, with Ito ratcheting up the icky bits with each turn of the page. I actually felt relief when the man died and the madness ended, relief for an end to his suffering but also relief at having a break from the increasing horror.

Then the dad was cremated, and the smoke and ashes rising from the crematorium stack formed a large spiral over the town. The hairs on the back of my neck tingled and I knew Junji Ito had done his duty as a creator of horror.

As mentioned, each story in Uzumaki focuses on an individual’s obsession with spirals, a shape the town appears to be infected with. The individual tales are cleverly eerie and grotesque, but what also begins to take shape is a greater mystery surrounding the nature of the town itself and the reasons why spirals are so prominent. We don’t get answers in this first volume, but there are hints of tortured and twisted spirits and a well placed and underplayed connection to the small lake at the centre of town.

Junji Ito left his mark on me with Gyo, a two-part horror manga, scenes from which still occasionally pop into my mind like a specter from the dark to rattle my senses and remind me that no one does unsettling horror like our friends in the East. Uzumaki is old news in Ito’s homeland, but it’s a worthy and welcome read for fans of true horror. (Chad Boudreau)